Animal diseases cause severe social, economic and environmental damage and in some cases threaten human health as well. Animal health is a key and a fundamental pre-requisite to ensure and enable global food safety and security, public health, international trade, and contribute to high standards of animal welfare.

The World Organisation of Animal Health (OIE) estimates that morbidity and mortality due to animal diseases cause the loss of at least 20% of livestock production globally. This represents at least 60 million tonnes of meat and 150 million tonnes of milk with an estimated value of approximately $300 billion per year.
Moreover, five influenza pandemics, starting with the Spanish flu, have killed millions of people, and the outbreak of ASF in Europe and Asia has killed thousands of animals and had a serious economic impact on the livestock industry.

The animal health policy of European Union (EU) for many years is based on fight against transmissible animal diseases, some of them causing epidemics and infect humans (zoonoses). EU animal health policy works by the motto “prevention is better than cure”, and covers all animals kept for food, farming, sport, companionship, entertainment and in zoos. It also covers wild animals where there is a risk of transmitting disease to other animals or to humans. Further, european policy protects human and animal health and welfare as well as food safety, working towards high animal health status of livestock, poultry and fish by controlling animal disease outbreaks and by surveillance and eradication programmes. The policy ensures a smooth and safe internal EU market of live animals and products of animal origin. It is also strongly linked to the international standards of the OIE and the EU’s obligations under the Sanitary and Phytosanitary (SPS) Agreement in the context of the World Trade Organisation (WTO).

The disease’ threats to the livestock industry have increased steadily over the past decades due to globalisation, increased farming intensification with changed husbandry and management structure, climate changes, changes in the weather conditions and changes in wild life management. These factors contribute to the risk of spread and evolution of pathogens.
African Swine Fever (ASF) for instance, has been spreading steadily in Eastern Europe since its introduction into Georgia in June 2007, and has recently reached Belgium, Bulgaria, Romania and China.
Another example is the poultry industry, which has had to content with a range of influenza viruses outbreaks over the past decade. Avian influenza poses a major threat to public health and continuously new human cases reported regularly by Chinese authorities. Since February 2013, there have been 1567 confirmed human cases and 615 deaths.

Antimicrobial resistance (AMR) is a major threat to the livestock industry and public health.
In May 2015, the World Health Organisation (WHO) agreed on a global plan to combat resistance to antibiotics in the framework of the “One World, One Health” concept.
Furthermore, there is currently no prophylaxis and/or therapies for some diseases like paratuberculosis in cattle, avian influenza and ASF in pigs, and for a number of other diseases the efficacy of existing vaccines is insufficient and new/improved vaccines would increase animal health and welfare and reduce the need for antibiotic use.

Globally, the EU Member States and the partners of the International Research Consortium on Animal Health (global network STAR-IDAZ IRC) invest significant amounts in the development of new or improved control strategies for a range of diseases. However, more could be achieved through increased coordination of the research efforts, joint funding of activities and sharing of results.

These efforts would be greatly facilitated by a coordinated international funding initiative focused on some of the critical challenges affecting the public health, environment and livestock industries. For some of the emerging diseases including ASF, there is an urgent need for R&D cooperation between European and other countries to avoid knowledge gaps and increase the level of expertise.

All the above demonstrate increased collaboration on animal health research in the EU.

This new initiative aims at:

Research and innovation co-funded through ICRAD would seek concerted approach towards the development of novel and improved instruments to address and control infectious diseases, particularly regarding novel detection, intervention and prevention strategies to:

by improving control of specific infectious animal diseases, in particular those where the role of wildlife and vectors are prominent, by further understanding of the epidemiology, ecology and means of surveillance and control

by providing new generic tools, systems for better prevention and improved preparedness to react to infectious animal disease outbreaks, in particular by designing and developing new or improved vaccines, diagnostic and surveillance tools and vaccination/immuno-stimulation strategies

by improved translation of key knowledge on host and pathogen interaction and pathogen transmission into pathways for means of prevention, detection and control of animal infectious diseases 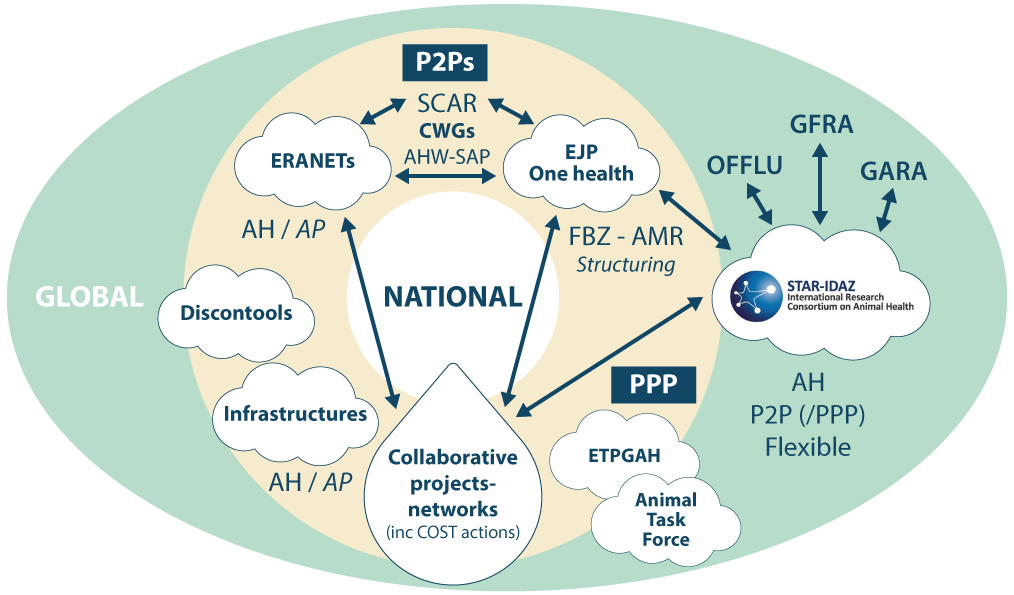